On 20 February 1899 the decision was made to build a Higher Grade department in two of Edinburgh’s schools, and Broughton was chosen as the school for the site on the north of the city, thus Broughton High school was born.  The site of the primary school and the Higher Grade dept, McDonald Road, was at that time a comparatively rural location.

The first pupil enrolled was Christina Mackenzie of 24 Beaverhall Terrace.

The first Headteacher was Alexander Hutchison. He was appointed Head at the early age of 37.

By 1904 the Primary school site was hugely overcrowded so it was decided that a new Higher Grade school be built alongside the old one.

The site was bought from the Heriot’s Trust for £600.

The new building was constructed very quickly, in 16 months.

The school was officially opened by Flora Stevenson, Chairwoman of the Edinburgh School Board on 3 February 1905. The total roll stood at 1735:  271 infants, 950 juniors, 389 higher grades and 125 pupil teachers.

Over the next 20 years, the golden age of Broughton, there emerged 2 major poets in Hugh MacDiarmid and JK Annand, 130 names were placed in the Open Bursary list at Edinburgh University and every major scholarship within Edinburgh University was secured by Broughton former pupils in the faculties of Arts, Science, Law and Medicine.

The school song is called “Broughton for Ever” and was written and composed in 1917.  The words were written by George Ogilvie, an English Master and the music was written by George Hume from Broughton Elementary School.  The song was “dedicated to the memory of the teachers, students and pupils who died for their country in the Great War”.

The school badge was designed in 1924 by JG Sinclair and the motto was selected by the Headmaster of the time, Mr Blacklaws.  The motto “fortiter et recte” means “bravely and uprightly”.

Broughton moved from McDonald Road to Carrington Road in 1972 and thus Broughton became a Comprehensive Secondary school. The Head Teacher at the time was Dr Shepherd. The building had been long promised and pupils and staff were astonished at the space and size of the new building. In the years that followed, the school roll rose due to an influx of pupils from Drummond High.

The City of Edinburgh Music School, situated in Broughton High, was established in 1980. It was originally named The Lothian Specialist Music School but was renamed when the Regional Councils were reorganised.

In 1986 there was a fire in the Library, destroying everything. The Library was reopened on 5 May 1987 by author Joan Lingard.

In March 1990 the school was struck by tragedy when 5 senior pupils were killed in a car accident. A memorial garden on the school grounds was created in their honour.

In 1991 a major change in the history of the school took place – Ainslie Park merged with Broughton… and the roll rose even further – at its peak there were 1600 pupils enrolled at Broughton. The Head Teacher at the time was Jack Scott.

The specialist Dance unit was founded in Broughton in January 1998 after the resident dance teacher Ms Pender saw there was a demand for extra dance coaching.

Broughton has a huge tradition of creating pupil-led school magazines: in the Library, there are copies of the Broughton School Magazine going back to 1911 and The High has been running since 1991.

In 2004 the decision was made that Broughton High was to have a new building under the PPP2 scheme, and the new state of the art building was completed in February 2009.

Copies of the old Broughton High School magazine are available to download now: 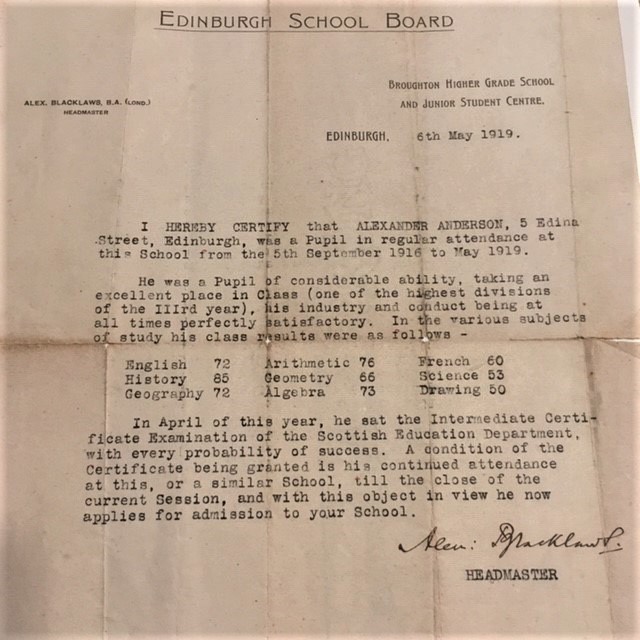 Mr Stuart Anderson contacted us after going through some of his late father's papers and came across this report on his education at Broughton Higher Grade School from May 1919.   This report was to be given to the Headmaster of the new school he was to attend when he moved to Liverpool.   He sent it 'as a piece of school history and pride in my father's achievements at Broughton School one hundred years ago!'

A copy of an article which appeared in the Scottish Daily Express from March 1957 about the first former pupils' reunion, was kindly sent to us by a former pupil of Broughton High School, Helen Clements (nee Craig).

A short memoir of the war service from 1917-1919 of former Broughton High School pupil, William Sharp Kerr (1899-1971) before and at the start of the Great War is available to read here, courtesy of William's grandson, Alistair Kerr.  The memoir is based on his diaries and some stories that he told. 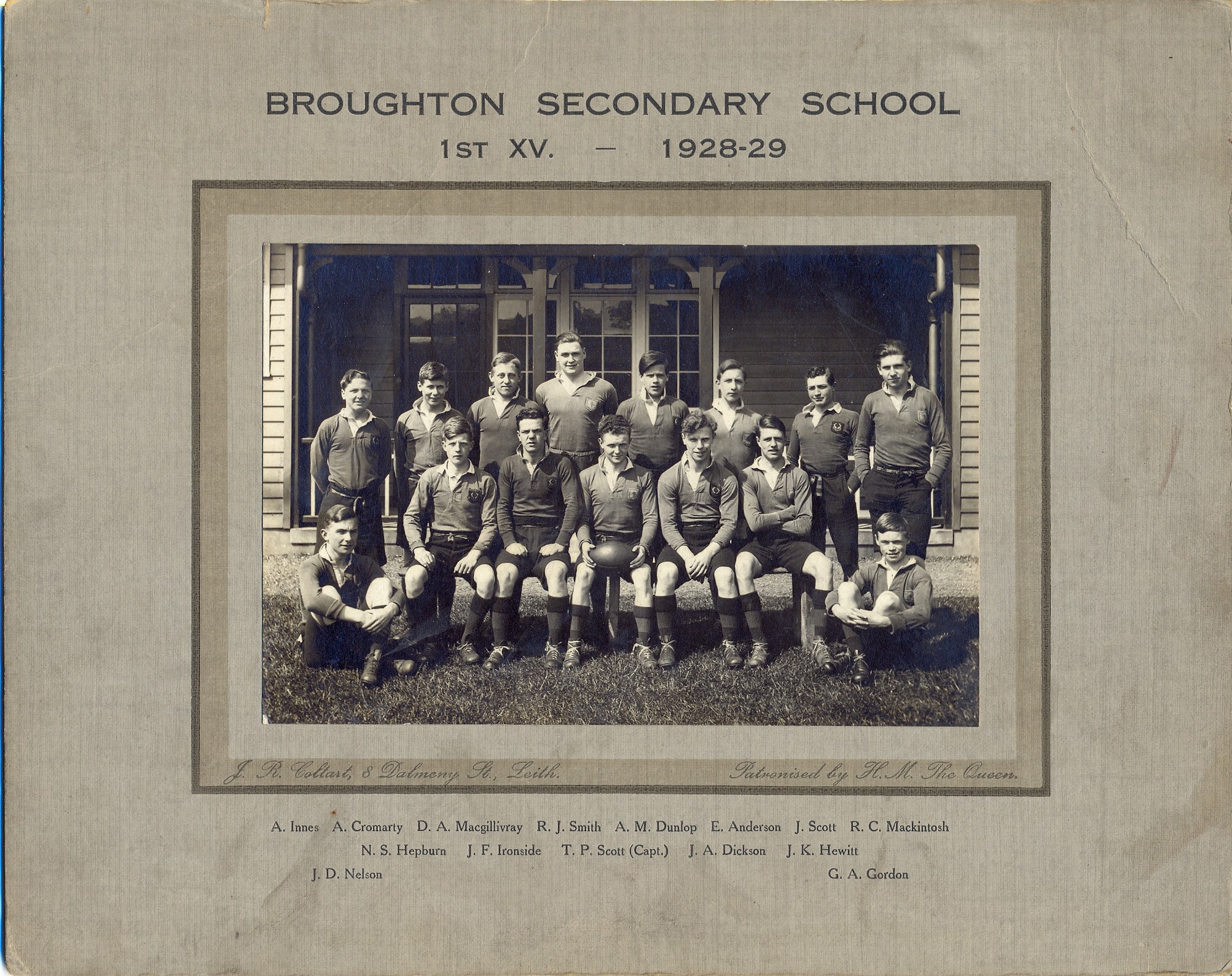 The copy was made by available to us by Mr Norman Scott, whose father was the team captain and his uncle was also in the team.

Click here to see a copy of the old Broughton Secondary School Song, which was kindly sent to us by the niece of a former pupil, Ian Grainger, from the 1950s.

A copy of the brochure produced to mark the official opening of the current new building, on 4 November 2009, can be viewed here. 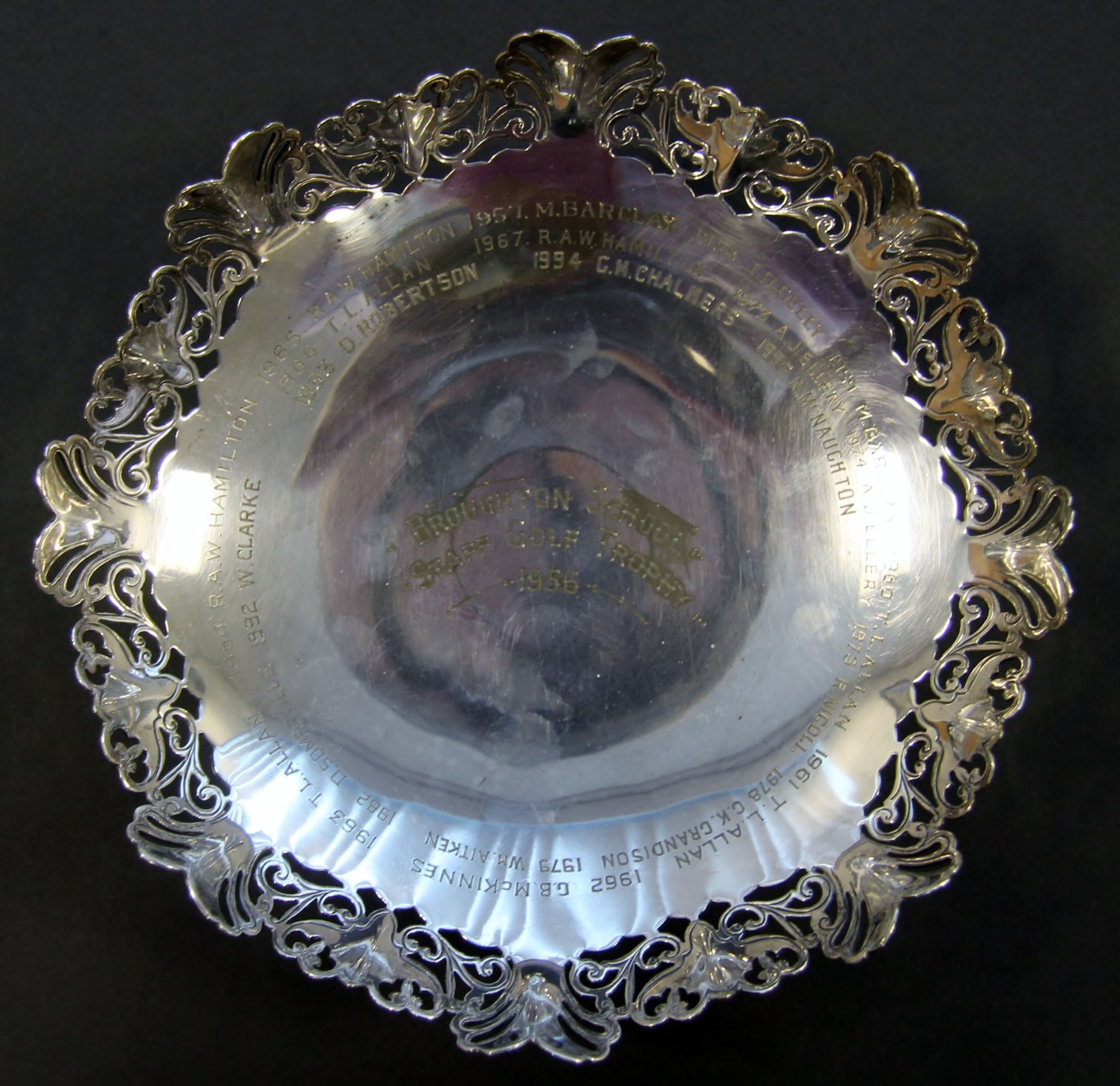 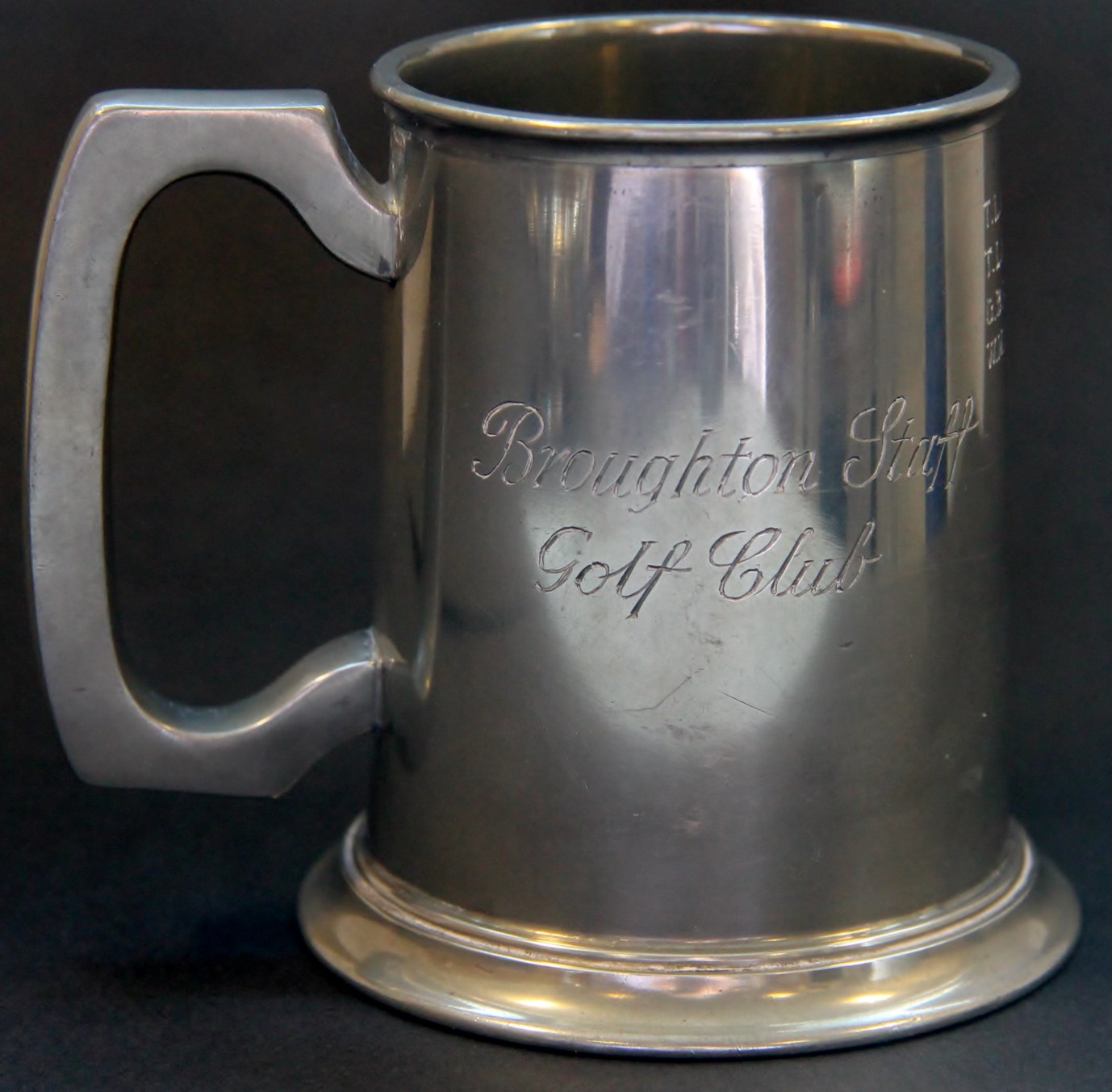 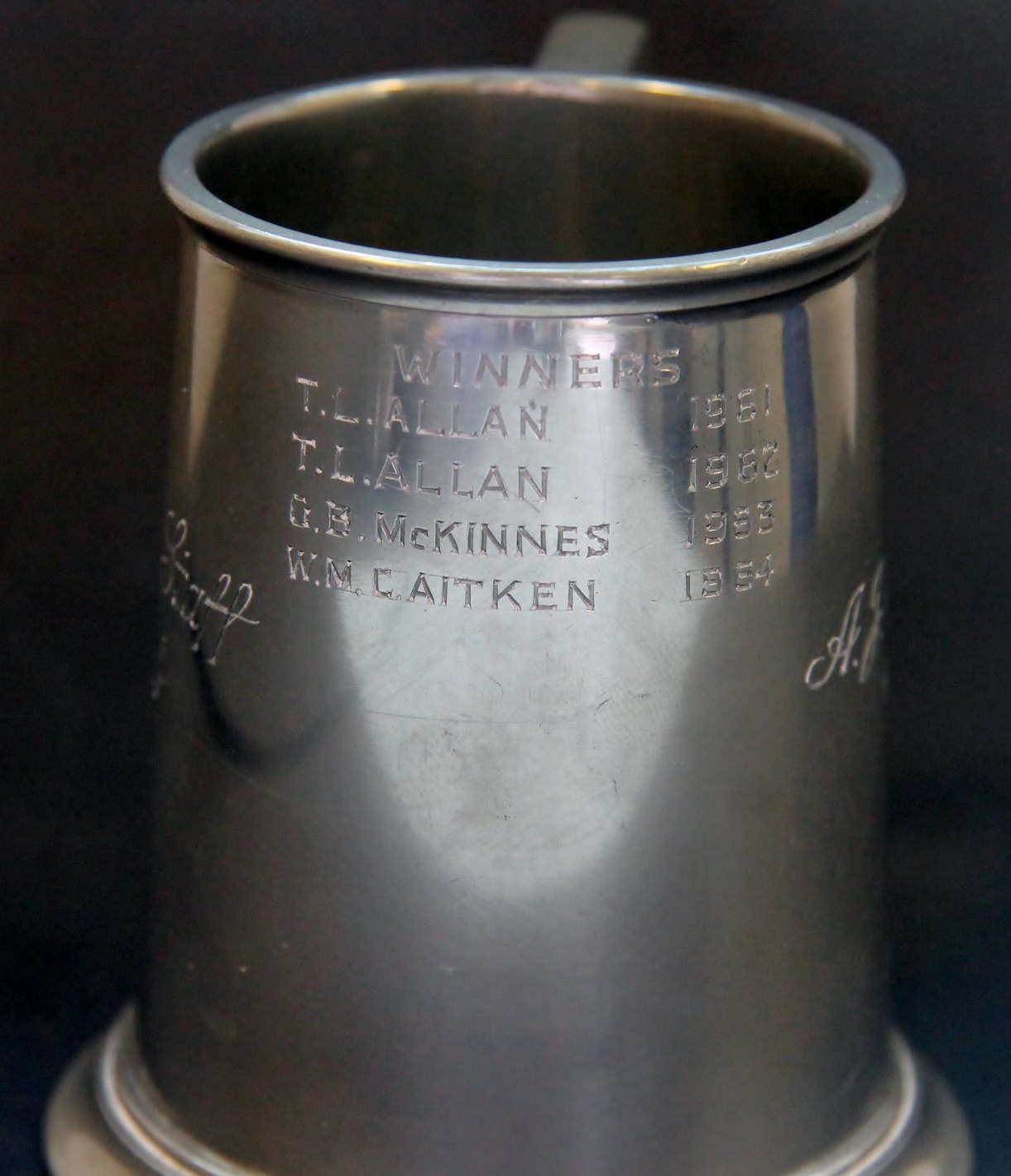 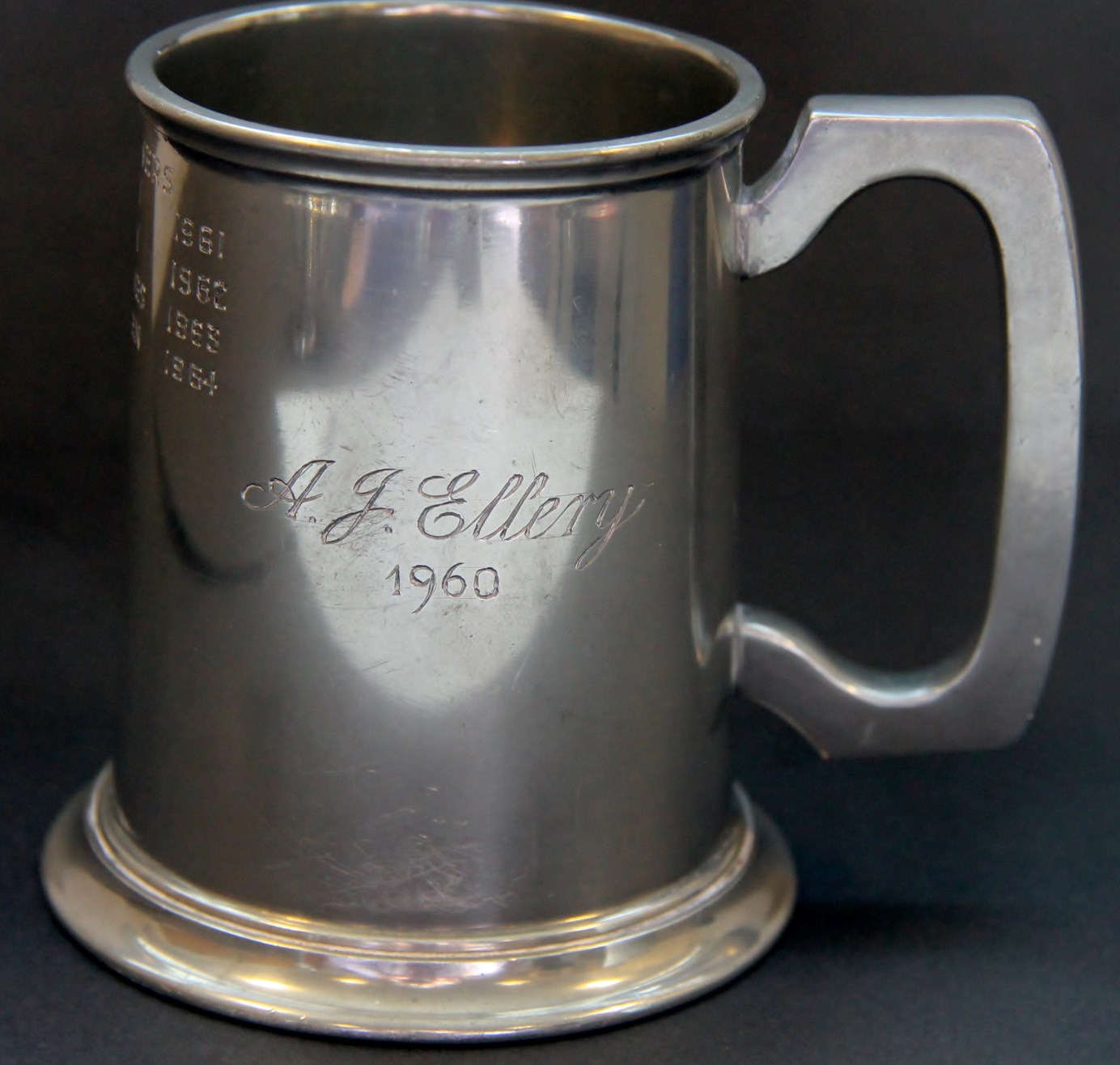 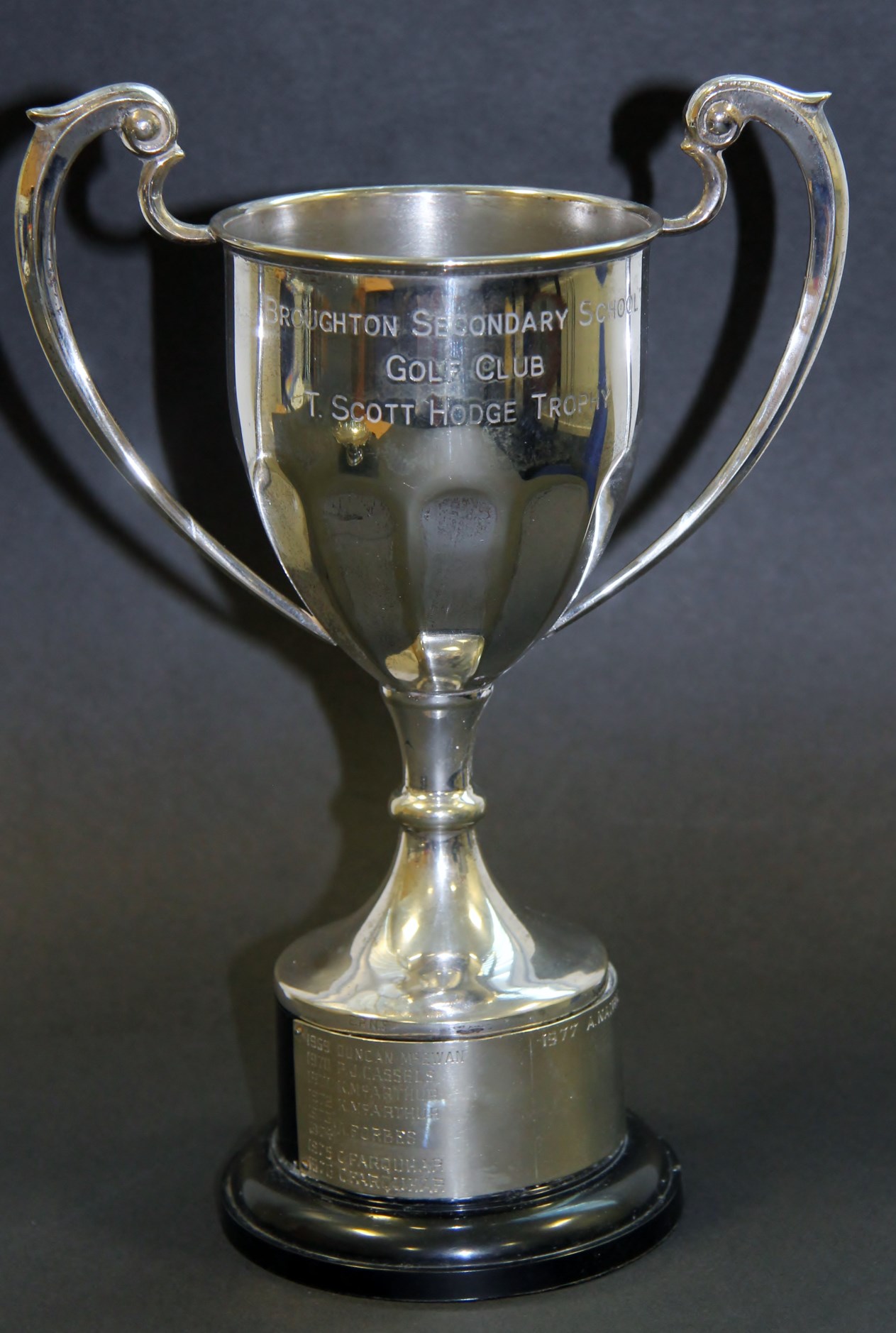 Stamped EPNS   (No other Maker’s Marks)